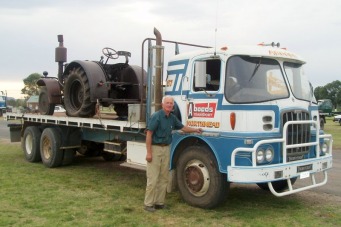 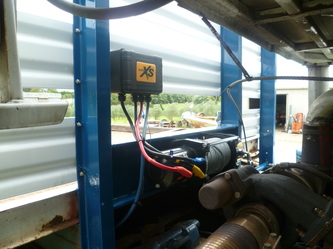 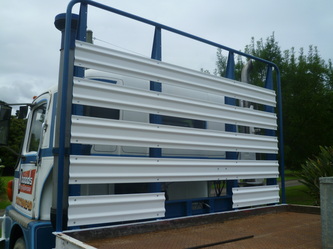 There is a rising interest in historic commercial vehicles across Australia, and has rapidly risen in popularity on the back of some significant events such as "Haulin' the Hume" and the truck shows hosted at the Penrith, NSW, Museum of Fire. Other events have been inspired by the 50th year of local assembly of Kenworth, MACK, Volvo etc. All have been strongly supported by the magazine, " Vintage Trucks and Commercials", which gives a voice to the movement.
I was hesitant to participate in these events due to my truck being a poor example against those highly restored trucks that grace the rallies. However, a visit to Penrith to the 2012 display convinced me to take part in some events, and I have done the 2013 "Haulin' the Hume" and Penrith truck show, where there was plenty of interest in the old girl. One outstanding message was not to repaint it, though the rapid deterioration of the paint dictates that something has to be done to preserve the fibreglass cab structure, especially the roof.
November 2014: I participated in the event "Climbing the New England", a truck display held in conjunction with an annual vintage machinery rally at Armidale, NSW, also taking a McDonald tractor for display. A centrepiece of this was a visit to the Devil's Pinch Cafe and Truck Stop at Black Mountain which was famous from the late 1950's as a rest stop for the truckies of the period. One photo of my truck was published in the period with two young waitresses posing in front of it. On November 7, that photo was recreated - same place, same truck, and the same two ladies! How good was that! Needless to say, the truck at about 13 tonnes climbed the infamous Moonbi hills on the highway with ease in 6th gear.
Whilst in Armidale I agreed to be interviewed by Vintage Trucks & Commercials Magazine (VTCM), and the result can be viewed on the Youtube channel truckstop.tv episode 12.
A more recent outing was "Haulin' the Hume" in April 2015, travelling the old Hume Highway from Hawkesbury Showground at Clarendon, to Yass, with a lunch stop at Goulburn Showground. It was truly excellent, and many photos and videos can be seen on Facebook and other sites.
In April 2016 it transported my Chamberlain tractor to Narrandera and return to take part in the 3-day National Tractor Trek. The outward trip of 550Km was accomplished in about 7 1/2 hours travel time, pretty good really.
Incidentally, one of the original 6V batteries still remains in the truck after nearly 14 years!
2018 update: In the intervening period, I decided to replace the rear drums with new ones I had acquired, but when one side was dismantled,  the new drums had to be machined to suit attachment, and the linings were pronounced quite serviceable. So the other side was left alone, as it is not a simple job to pull the wheels apart. The brakes were found to be wedge operated. At the same time, one of the front wheels was found to have bearing movement, so a new set of bearings was fitted. Since then, the power steering pump started leaking badly, so it was removed and kitted out with new O-rings and seals. Also the fuel lift pump started leaking, and a kit was acquired and fitted, and now the truck is now clear of oil leaks. Also, starting problems emerged with two batteries showing low voltage. These were replaced, still only the 5th and 6th batteries of the four in just on 16 years - pretty good!