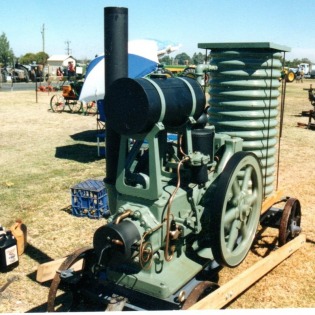 McDonald VLA engine
A. H. McDonald & Co manufactured a range of engines, tractors, road rollers and other products from the first few years of the 20th century up until their demise in the 1970's. The 'V' range of engines were made from 1929, rated at 13-15HP @ 500RPM with a bore and stoke of 7" x 9", the design having its origins in the Avance Swedish made tractor that McDonalds marketed in Australia in the late 1920's. Initially this engine was designed to replace an outdated engine used on medium weight road rollers, but it became popular for stationary uses. In 1939, a substantially improved version was introduced, designated model VB, rated at 15-17HP. During the Second World War, about 100 were made as self contained radiator cooled versions for military applications such as driving refrigeration compressors, designated model VBR, and many of these later found their way into civilian hands. In 1948, further improvements to the design incorporating the loop scavenge principle resulted in the VLA, rated at 19-21HP. The last VLA was made in 1959.

As can be seen, my engine has been set up on a substantial transport with a cooling tank. Weighing in at around a tonne, it needs to be solid! Even so, the engine is poorly balanced and the whole things shakes badly at higher revs. It really barks from its 5" diameter exhaust!