A H McDonald and Co made semi-diesel engines in various sizes from 1929, and after WW2 a number of them were updated to introduce the 'loop scavenge' principle, achieving a boost in power output without any change in bore and stroke.
The original Model T engine was rated at 30-35 BHP, and was used in the Model TWB tractors as well as for stationary applications. The postwar uprated engine designated Model TL was introduced in 1947, and saw a boost in power output to 40 BHP. It was extensively used in stationary form  to power pumps, sawmills, etc. It was also used to power the postwar T6 tractors, though only a handfull of these were actually built. (See the story of my T6C tractor on another page,) Approximately 250 TL engines were built in total, the last in 1959.
Serial Number 1113TL was made in 1950, and was purchased second hand in the early 1950's for use in a sawmill located just north of Taree, NSW, where it was still being used until March 2012 when the mill was closed upon its owner's retirement after 67 years of sawmilling. The deal was concluded in April 2012 to acquire both this engine and a second T type, and they were retrieved in late June 1012. The weight of these engines is about 1 tonne each.

The sawmiller could not speak highly enough of these engines, claiming they had never let him down. It was apparent they suffered from using mineralised cooling water, because there had been head failure due to the water jacket rusting through. A couple of derelict engines at the mill site bore testament to this. Nevertheless, he claimed they still had the original piston rings after 60 years of operation, and certainly still had plenty of compression. Plenty of oil, especially before starting, was the secret, he told me. The amount of oil and sawdust on them almost obscured their features, and was a big challenge to clean up.
I had been working on setting up another engine, 950T, for display at rallies, and had made a transport for it using wheels and turntable acquired some years before. However, 950T refused to start when the time came, not entirely unexpected, as the bore had been found to be quite poor from corrosion. 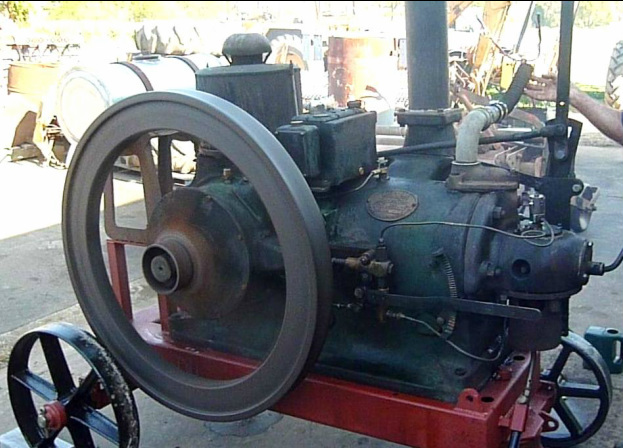 First run of engine 1113TL without cooling system
In the course of working on 950T, the new engines arrived on the scene, and it became a race against time to substitute 1113TL on the transport and complete setting it up in time for the "Clarendon Classic" rally on 15-16 September 2012. The opportunity to start 1113TL for the first time was only achieved on the Wednesday prior, and it did not go well! First of all, the reed valve assembly had to be dismantled and cleaned, as a lot of muck had found its way there during the extensive pressure washing that had been necessary to clean the engine of inch-thick gunk. Then heat was applied but no fuel appeared to be getting through to the atomizer. The atomizer itself was found to be blocked, so a swap was made with 950T - OK. Then more heat and now fuel coming through, but all that happened was a few bangs and a lot of smoke from the hot bowl area. So off it came to reveal the bowl itself to be badly cracked. A replacement bowl was fitted along with a new copper gasket, and on the next try it sprang into life - see photo above! A significant big-end bearing knock was apparent, but at running speed disappeared. So the fuel and cooling systems were hastily completed and the engine loaded for the rally. When first started, a lot of oil escaped around the head area leading to much smoke. This was corrected by re-tightening down the atomizer, after which it was started many times, the only downside being the amount of black oil spots dropped onto the surroundings. It was not governing very well so needed constant throttle adjustment, but it is a fine machine, and so easy to start! The oil spots can be controlled to a degree by cutting back on the amount of lubricating oil to the piston, but I am loath to do this in case I go too far and cause damage. As old A H McDonald extolled in his instruction books "Oil is cheaper than machinery"! 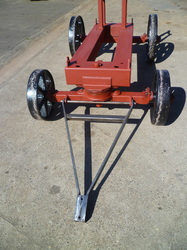 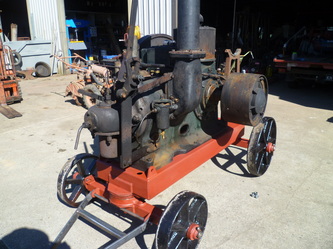 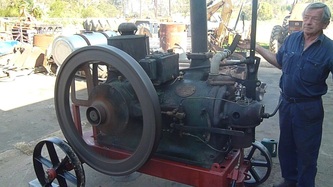 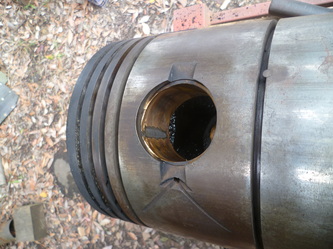 December 2012: After feeling the engine whilst rocking the flywheel too and fro, it was clear the slack was not in the big-end, but in the gudgeon area. I bit the bullet and commenced dismantling the engine, finding wildly uneven thicknesses of shims in the big-end bearing along the way. The gudgeon area of course told the story! With a fully floating pin, there is not only a bush in the con-rod, but also each side of the piston. These were both worn right through the bronze bushes both sides to the cast iron - at least 1/8" or 3+mm. The probable cause was that the oil holes were blocked with carbon, preventing lubricating oil from getting to these bushes. They were not original bushes, so obviously they had been replaced during the engine's working life. It was decided to pirate the piston from another engine, and although this was stuck from years of neglect, it came out eventually and its gudgeon was in quite good condition. A good cleanup making sure all rings were free and oil ways clear and it went into the engine with no trouble. After fixing a few other minor things it was started and ran well, though still not governing properly. See it running on: http://youtu.be/3X-fUMcuZZo. It's ready for the next rally!