This tractor has quite a story. The engine only was acquired back in 1996 as part payment for the sale of a truck. Upon investigation, it was found to be the engine from the very last tractor of the model, sold in late 1944 to farmers in North-Western Victoria who ceased farming only a few years later. What became of the rest of the tractor is unknown. The sale had a Government authorisation, as McDonalds had diverted their manufacturing efforts to war time requirements, and going by some of the parts on the engine, it had been made up out of the scrap bin. As an aside, there are two TWB tractors recorded with later serial numbers, but both these were refurbished trade-ins.
Having the last of the model was of considerable significance, so the decision was made to try and build a tractor with just the engine as the starting point. During the following few years, most of the parts needed were sourced - a complete gearbox and front chassis, wheels and front axle, all new sheet metal including fuel tank etc, radiator (this came with a tractor attached - see separate story), radiator castings which differ from earlier tractors in having 'McDonald' cast in to them, steering box etc. One item eluded me for many years, and that was a clutch pulley.  It finally surfaced in 2008.
In 2005 work was done to prepare the wheels. The set of wheels that had been obtained dated from the introduction of rubber tyres, when McDonalds cut down spoked steel wheels and welded on rims. The opportunity had come up to buy the new tyres needed, so the front wheels were completed. The rear wheels were more of a challenge. The wheels obtained were 32" and had rusted-out rims. Suitable tyres had been simply unobtainable for many years (they have since become available), so the decision was made to go to 28" wheels, an optional size offered by McDonalds. Rims were purchased and the old rims cut off and replaced with the new ones. Other work done at that time was the complete re-bushing of the steering box, and boring out the front axle pivot pin hole till it was round again, then making a new bush to suit. The job was set aside in late 2005 for 2 years to concentrate on the Lanz Bulldog tractor.  Some photos of this work are shown below. 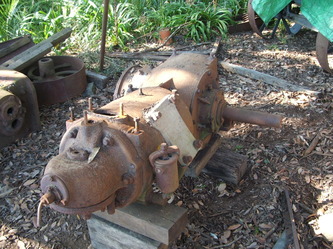 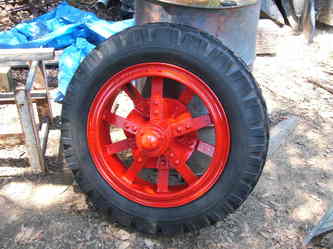 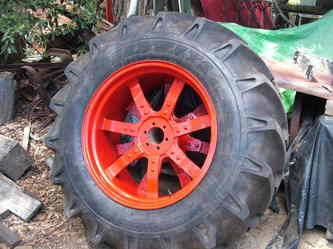 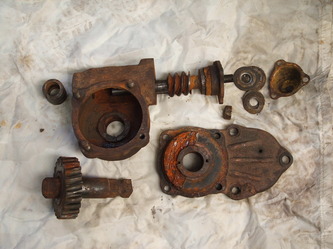 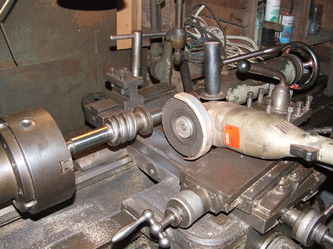 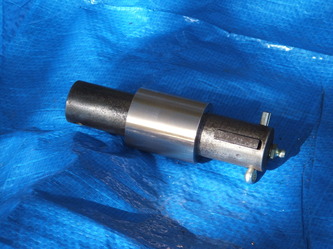 Work recommenced in late 2007, when the engine was taken from its resting place and cleaned up. It proved to be in excellent condition with negligible wear. The gearbox was tackled. Because the input shaft rotated within its bearing (the bearing was seized) it had to come out. The very poor condition of the gearbox came to light, with every gear missing chunks from teeth and the case hardening worn off. One axle was found to be loose in the bull gear too, and this revealed the sun gear carriers in the diff had failed at some time. So a search was on for replacement gears, the cluster gear proving the most difficult to locate, finally exchanged for other tractor bits in March 2009. So finally the gearbox was complete. In the meantime, it had been pointed out to me that the front chassis (sometimes called a 'boat') that I had was from a very early tractor, thus inappropriate for the last of the model. After many false leads, one finally was obtained in November 2009. By this time the project had been at a standstill as this item was vital to further progress. Attention was diverted to the early McDonald stationary engine in mid 2009, and this project will be completed before getting back into this tractor. Here are some more photographs from this phase. Note the enormous amount of bronze repair on both sides of the clutch pulley! 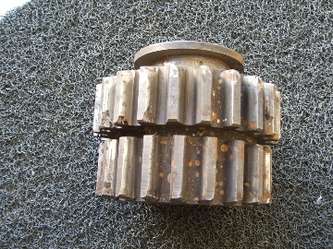 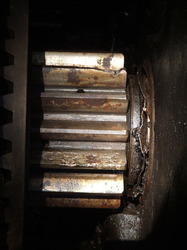 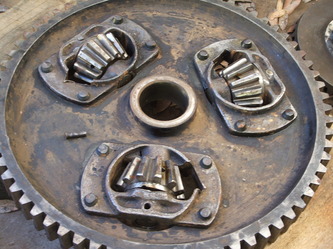 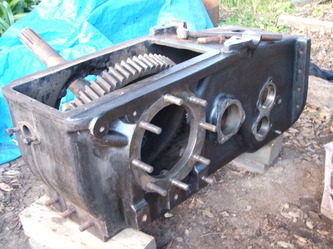 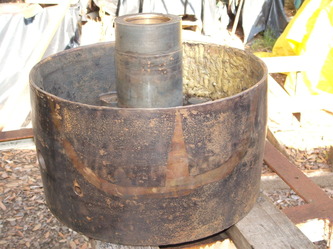 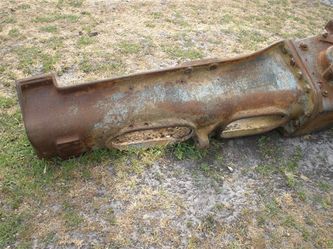 November 2010: Most of the components that were primed and stored in late 2007 were found to have rust showing, so all of them have to be cleaned up and re-primed, this time with red oxide which seems to be far more impervious to moisture than the grey stuff used before. I could do without all the rework! The chassis (boat) has been cleaned up and primed. These parts need to be painted without delay, but the gearbox needs to be looked at again too as it was only wire-brushed and treated with Loctite rust converter previously.
March/April 2011: By now the gearbox has been completely reworked (I use only wire brushes in an angle grinder or drill), primed and painted. Also almost all the minor parts have been painted, all with two coats of topcoat. Also a new waste oil tank has been purchased. These tractors, and indeed all McDonald hot bowl engines, use total loss lubrication, and surplus oil is drained off via a cock, or in the tractor case, accumulates in the waste oil tank which is drained daily. Below are some photos. 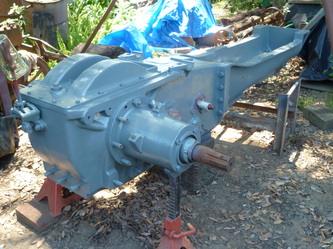 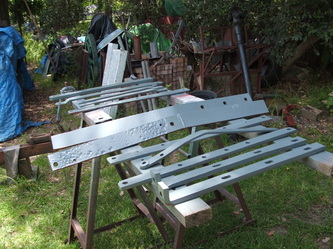 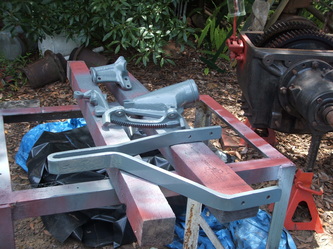 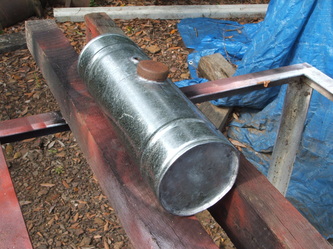 Work in progress includes attachment of the main draw-bar angles, the front axle, and steering box. These items are necessary to enable the wheels to be attached. The wheels are needed for stability when fitting the engine, flywheel, etc.
Later in 2011: By now the front and rear wheels have been assembled, and the engine hoisted into place. A major stumbling block is the front axle radius arm, which despite advertising for it several times, has not turned up. One will have to be borrowed from another tractor. Here are a few more photos. 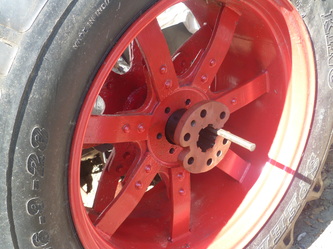 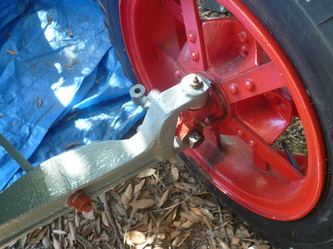 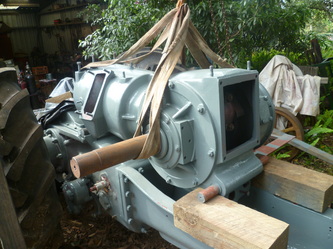