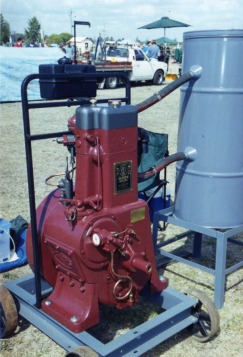 Mars 8HP engine
Mars engines were made in Brisbane, Queensland, by the Mars Machine Tool Manufacturing Company, whose main products were lathes and milling machines of high quality. The company started life in the 1920's as Rapson & Dutton, and in the 1930's they made diesel engines in both horizontal and vertical configurations under the brand name 'RanD'. These pre-war engines all used the Brons (or Hvid) fuel delivery system. In the post-war period they produced full diesel engines of various ratings under the 'Mars' brand. No dating information has come to light so far. These engines were very well built and long lasting, yet are quite rare.

The engine featured here is an 8HP example. It was found literally in a blackberry patch, full of water and seized  because of a missing rocker cover. As testament to its quality, there was no internal damage, and restoration was straight forward. Even the original Australian made Pyrox injector and injector pump were salvaged. It is painted in its original colour, except the rocker cover was originally nickel plated brass. The one on my engine was fabricated from 6mm steel plate, with some 27 pieces all welded together and ground smooth.

It has huge compression, and a good turn of speed is needed to get it over the first compression stroke after releasing the decompression lever. It is regularly taken to rallies. 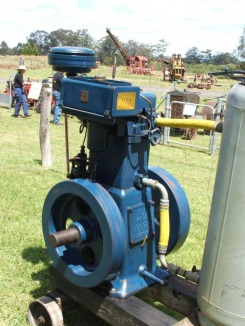 This engine is a 5HP example, quite different to the above. It has a very strong resemblance to the Lister CS diesel, except that Mars enclosed the pushrods and the rocker cover is shaped to suit. The rocker cover style can be said to be a trademark feature of all post-war Mars engines.

The engine was acquired in 2009 in running condition as seen here. Whilst the timber transport and LPG cylinder cooling tank may be a little below standard, the engine itself makes up for it by being such an easy starter, quiet running and vibration free, that it would seem unnecessary effort to revise it. It is believed the air cleaner and fuel tank are original and there is a small Mars badge with the Mars logo on it. There is no serial number as far as can be ascertained, and no evidence of a nameplate ever being fitted.