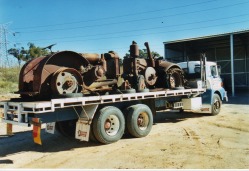 Retrieval
This tractor was acquired in a very derelict state in 2005. It was purchased along with a McDonald tractor, but a decision was made to undertake restoration of the Bulldog rather than the McDonald. No information on the Bulldog's previous owners has come to light, but quite a bit has emerged about its arrival in Australia back in 1938.
It seems that a shortage of tractors had emerged at the time, and importers Demco Machinery of Sydney brought in a batch of nine tractors, all with running serial numbers, and all of higher than normal specification, although not all identical. It was not normal to have lights, 6-speed gearboxes etc on agricultural tractors in Australia. Four of the batch were shipped on to New Zealand. What is truly amazing is that every single one of those nine tractors still exists, some in working condition, others as work in progress. 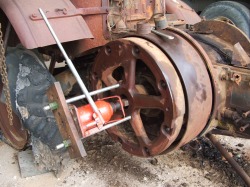 Removal of clutch flywheel
The tractor was in a terrible state! Everything was seized, it was missing many parts, and it had either been pushed about with a bulldozer or dropped on one corner from a height. On the credit side was its unusual specification - petrol start with buzz coil, wooden rimmed steering wheel (though the rim was missing), wheel brakes (not turning brakes), 6-speed gearbox, clear evidence it had been fitted with front mudguards, and rare to Australia the large plate clutch. The engine and gearbox were actually found to be in quite good condition.
The photo to the left shows the pulling of the clutch flywheel, using a 30 ton jack. It had proven impossible to remove the key, so the whole lot, key and all, was pulled. Unfortunately, the key had been shimmed, and the shims did not move with the rest, causing the flywheel hub to split at the rear. This was repaired by welding, then shrinking a sleeve over the repaired part. Despite this, the flywheel had flogged badly during its working life and eventually had to be bored and sleeved, and the crankshaft section ground as well!
The large plate clutch is a cumbersome, extremely over engineered device. The two clutch plates have six segments of friction material on each side, 24 in total, and it had to be relined, along with making new bronze bushes for the clutch centre. Ultimately, the clutch worked fine, if rather heavy to operate. 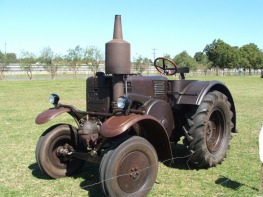 First outing September 2007
The tractor consumed many hours and considerable funds to complete. Locating the many missing parts, reconstruction of the front axle, remaking most of the oil lines, repairing crushed mudguards, straightening bent draw-bar components, relining foot and hand brakes (in addition to the clutch), rewiring and replacing all electrical items, replacing radiator cores, making one from two governor flywheel covers, rebuilding the air pipe, new muffler exhaust extension pipe, new tyres, replacement steering wheel rim - to name just some of the major tasks involved. Also of note too was the importation from Europe of front mudguards and the light bracket and other stays for the front guards, as well as radiator shutters, electrical switches etc.
The end result (still missing air pipe and clutch flywheel cover at the time) is shown in the adjacent photo.

Additional notes: The clutch flywheel cover proved difficult to obtain, and in the end two covers were obtained, one with rusted outer and the other with rusted inner. The spot welds were unpicked and the good halves mated together producing a perfect cover. Similarly, a new air pipe has been fabricated, so the tractor can be considered complete except for seat upholstery. A 2-part article in The Old Machinery Magazine (TOMM) resulted from its initial outing and can be found in Issue 134 (Dec 2007 - Jan 2008) and Issue 135 (Feb - Mar 2008).