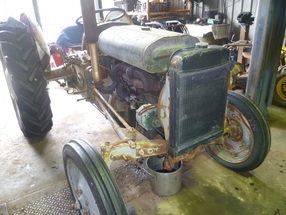 This rather forlorn looking tractor has been in my possession for 5 or 6 years but when run, lost oil pressure completely after a few minutes. It was missing tinware and some lift arm parts. Most have now been acquired.
I decided to give my current Fergie to my son, and so this one needed to be repaired as a replacement.
So in November 2013 investigations into the cause of the oil pressure problem commenced. What a mess was found! One crankshaft journal considerably undersize and probably the main problem, but worse still, a cracked crankshaft.  Also there was serious wear in the cylinders and the timing chain was very poor, so the decision was made to do a full engine rebuild. On top of this the previous repairer had made liberal use of silicon and it was literally everywhere, and lots of bolts were missing and the holes simply filled with the stuff. On the other hand, the steering is remarkably tight, and little wear in brakes and other external accessories.
By this time, so many parts had been dismantled it seemed logical to do a full dismantle and repaint as well. Then the clutch plate had to be replaced, the head fully rebuilt (new valves, guides, springs etc, and a new PTO shaft to replace the original which is smaller than standard requiring an adapter for modern implements. So all the parts have been purchased, including a new crankshaft. A new radiator had been fitted a year or so ago.
Every piece, nut and bolt, is being cleaned to bare metal with abrasive wheels etc, and immediately primed. For a small tractor there sure are a great many bits and pieces! Except for the seized draft control rod, the gearbox and diff housings did not need touching, and only seals and welch plugs replaced. Here are a few progress photos. 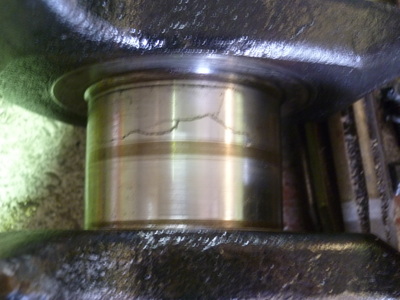 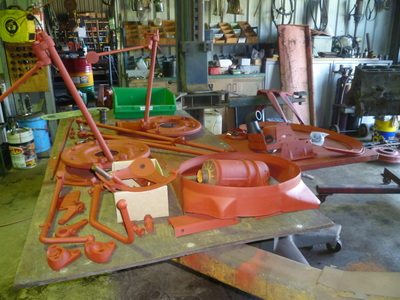 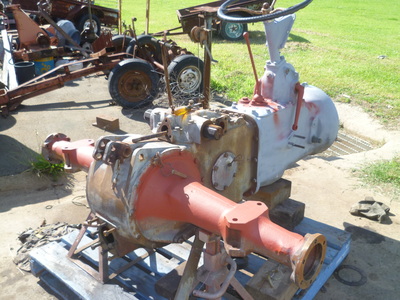 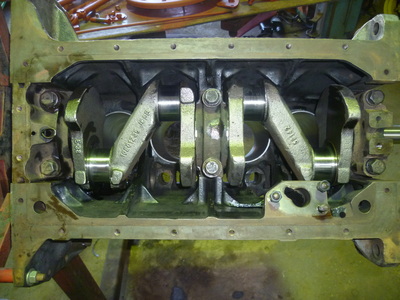 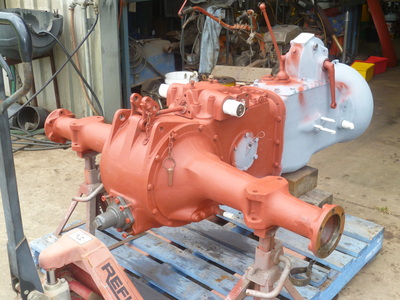 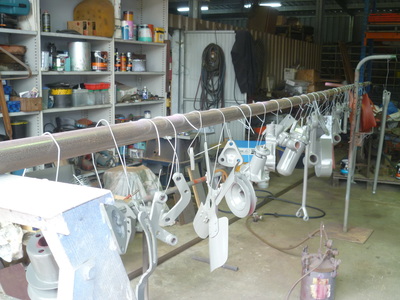 There was much drama trying to obtain paint of the right colour. What is marketed locally is Stoneleigh Grey, which suits the Ferguson 35, but not the TE series. In the end a sample of colour was taken to a paint manufacturer who matched it to the best of their ability. It is not quite right, but is acceptable. So a major paint day took place and most of the parts given a coat all over, except for a few items like the seat, fuel tank, rear wheel centres etc which yet require painting on the other side. I do not have the facilities to use two-pack paint, but after a couple of days the paint is surprisingly hard, so I am happy with the choice. The engine and wheels remain to be painted. A second coat will be applied when assembled to include all the screw heads and to increase the overall paint thickness and cover the few spots that were inevitably missed. There is a lot to be reassembled first! 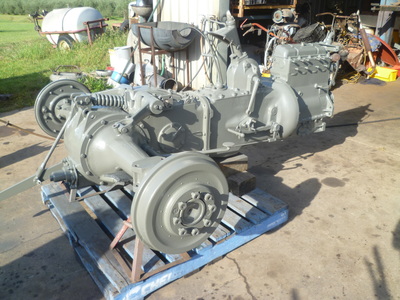 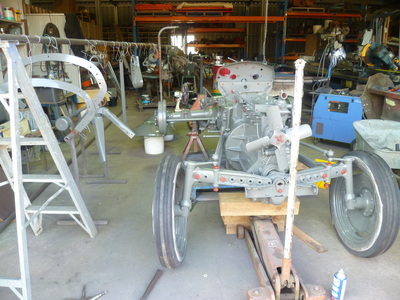 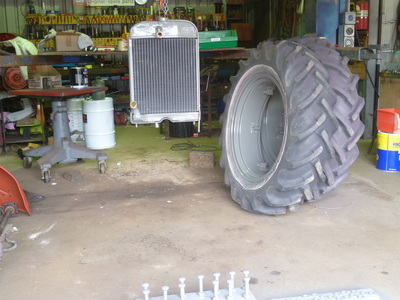 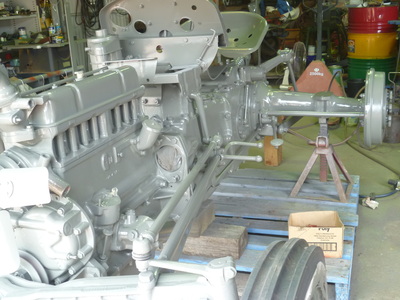 The above photos show it progressing apace. After fitting new welsh plugs and seal at the back of the gearbox and a new clutch plate, the engine was reunited with the transmission, then painted thoroughly. After drying for a day, the front axle beam and stub axles were refitted, and remaining lift accessories, radius arms and steering arms. Assembly of the dash panel was the trickiest. Firstly, I had put the steering column on back to front, then after correcting this it was discovered the front wheels were out of alignment (it had moved one tooth on a gear), so off it came again. This seems to be the story - everything has to be done twice. Cleaning up the rear wheels was a major task, done in 40 degree heat. The new radiator came in black, so it too has been painted. The colour is growing on those who have seen the project, and will be recommended to others. It is now right on Christmas, so the paint will be allowed to harden for a few days before fitting governor, electrics, fuel system etc. In the meantime, the tinware items can be worked on, especially the bonnet and grille.
Post Christmas work enabled the remaining items to be assembled including back wheels, engine and transmission filled with oil, and the engine started for the first time. Oil pressure was excellent but an oil leak appeared at the joint between head and engine block, and the engine oil was found to be milky indicating an internal water leak. The bottom line is that great care is required to check that the protrusion of the cylinder liners above the surface of the block does not exceed the recommended .003-004" and if necessary have them machined to suit. If supplied with copper sealing rings, these rings do not compress significantly and and the head gasket will not compensate for greater protrusion. The cylinder block of this engine may in the past have been surface ground.
The copper sealing rings were exchanged for the older lead type, and the head fitted without a head gasket and tensioned down. The protrusion of the cylinder liners was then rechecked and this time found to be OK, so the engine was reassembled and test run, and no oil or water leaks appeared, thankfully. We were not out of the woods though! After the initial test run, oil was found to be leaking from the timing cover oil seal, necessitating removing radiator and front axles to be able to remove the crankshaft pulley. A better one was found and a new seal fitted, then it was reassembled and test run again, this time with no more oil leaks.
Fast forward to mid March, and at last rust repairs to the mudgaurds and more significantly a near complete rebuild of the bonnet with much new metal have been completed. painted, and mounted on the tractor. Thanks to my friend who is simply the best at this sort of work. All that remains now is a small amount of touch-up work and other minor items.
The tractor has been committed to be part of a display at the forthcoming Royal Easter Show during April. Here are a few photos of what it now looks like. 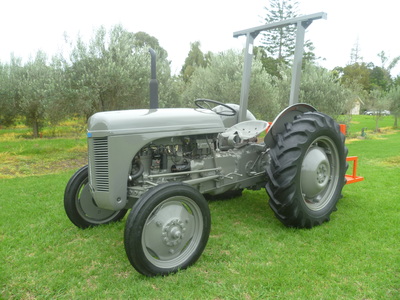 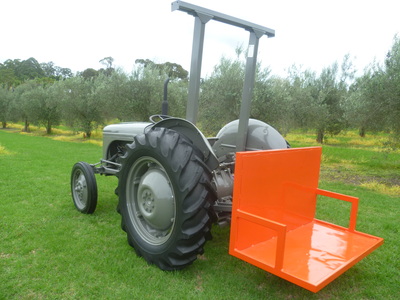 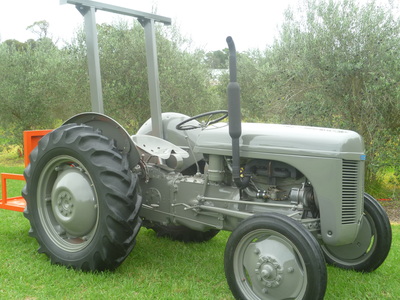