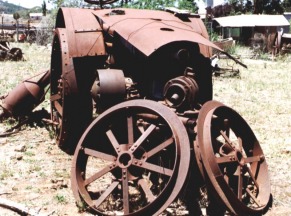 As found
The photo at the left shows this tractor when found in 1994 in Central Western NSW. It was missing some items, most significantly the complete radiator assembly. It had been sold new in 1937 to farmers in the locality, and most probably had some parts such as wheels exchanged from another, earlier tractor, as records show this one was sold on rubber tyres.
To recover the tractor, new front wheel bearings were fitted to make it mobile enough to be loaded onto a truck. The main task initially was to free the piston, as it had sat for many years with the head off, and the cylinder was full of blown-in sand. Upon accomplishing this, it was set aside while attempts were made to acquire missing parts. Examination showed that every oil and fuel delivery pipe had been repaired, mostly with soft solder, and the pipe from the lubricator to big end had actually worn a distinct groove in the cast iron block around the exhaust port from vibration. Virtually every stud and bolt had damaged threads from looseness through vibration. The rear axle bearings were shot and ultimately replaced, though the rest of the gearbox was serviceable enough. 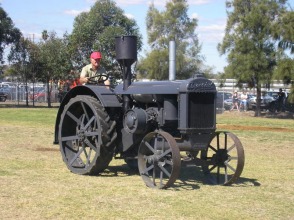 Finished tractor
One conundrum showed up from the very beginning. The width of the front wheel hubs were narrower than the stub axles by about 2 1/4"! This difference was never satisfactorily explained, other than really early TWB's did have narrower stub axles. After efforts to locate the correct axle failed, hub extension adapters were turned up, and these proved successful. After successfully locating a complete radiator (try doing that now!) and obtaining a complete set of reproduction sheet metal, manufacturing a fan hub assembly, re-bushing the steering box etc myself over several years, restoration commenced in earnest in early 2005.  The head was found to be from an early example, and metal had to be ground away to clear the piston. All new pipework, every stud and bolt replaced, new big end bearing fitted, cleaning, painting, major rework of the bonnet sheet metal that did not fit, and so on. An estimated 2,000 hours in total. The colour, charcoal grey, is not standard for McDonald, but was my choice. The wheels with cross-over spokes are quite rare and very attractive in my opinion. The tractor was featured in a short article in "The Old Machinery Magazine" (TOMM) following the September 2005 "Clarendon Classic" Rally where it made its debut.

A word about the 'new' big end bearing mentioned above. Following acquisition of my first McDonald tractor, I located a descendant of the original owners still on the property and we became firm friends. During a visit I was invited to have a look for anything useful in a small room at the end of a shed, and there I discovered a brand new pair of big end bearing shells still wrapped in waxed paper, amongst many other McDonald parts. So this bearing found good use. However, during the rebuild, I pondered on how to determine the thickness of shims that would be needed to achieve the recommended 7-10 thou clearance. In the end, I turned a piece of steel to exactly the same diameter as the big end journal, and using the con-rod only, set up the shims by trial and error. The total thickness turned out to be about .035" each side, and it was much easier to do the job on the bench than wrestling it within the confines of the crankcase, where there was the added risk of damaging the journal or bearing surfaces each time they were removed. That con-rod is no lightweight! Even though my solution might be obvious, I have still not heard of others making a dummy journal for such a purpose. Incidentally, big end bearing shims come only in .010" and .020" thicknesses, so clearance adjustment is hardly critical!

An update on this tractor.
Its debut back in September 2005 was far from successful, as it developed a bad radiator leak, and more seriously, it could not be started to reload it for the trip home. After dragging it home, it was dismantled to repair the radiator, quite a job in itself. The starting problem was identified as a faulty atomizer (injector) which merely 'dribbled' rather than producing the atomized spray of fuel that it should. I had very little by way of spares, so obtained a set of drawings for the atomizer, but my efforts at getting a batch manufactured were to no avail, as the 5-start thread in the vital part was too difficult. So the tractor sat under cover until opportunity smiled upon it.
Fast forward to January 2013. Having acquired a pair of stationary engines similar to the tractor engine, I stole an atomizer from one of them (the other engine had been set up for show in 2012), and after checking it operated satisfactorily, fitted it to the tractor, filled the radiator, added some fuel, and it started first try. So it was reassembled after all this time, loaded up, and taken to a show in late January where it attracted much comment. Below are a few photos to celebrate its return to life! It is apparent the engine of this tractor has higher than normal compression ratio, as it has a quite different, harsher sound than normal, and truly barks when under load. This suggests the cylinder head is indeed a mismatch, being from before a change to the deflector shape on the piston was introduced. 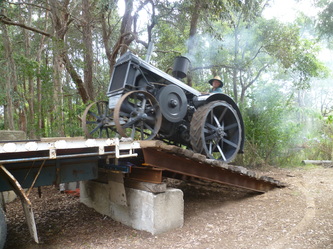 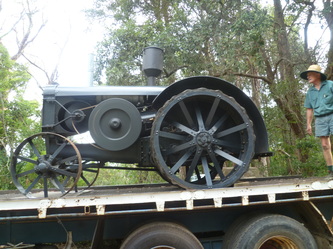 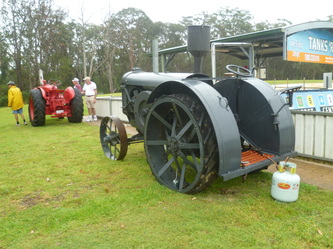