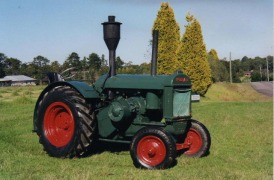 McDonald T6C tractor (taken 2004)
This is one of the only 20 tractors made by McDonalds after World War 2, all fitted with 6-speed gearboxes and live Power Take Off. One T6A, the prototype, was made in 1948, and its fate is unknown. Nine T6B tractors with various improvements, 7 with the earlier type T engine and 2 with improved TL engine were made in 1948-9. Then just 10 more T6C tractors with TL engine and an improved PTO clutch were made between 1949 and 1955. Of the 20 post war tractors, some 14 are accounted for - a very high survival rate! S/N 1029 was sold on 30 June 1953 to wheat farmers in central-western NSW. They were repeat customers for McDonald tractors, their first in 1934. They must had been very dedicated customers, because the price of 2,200 Pounds would have bought four Fordson Major tractors at the time!
This tractor was stumbled upon quite by chance and ultimately purchased from its second owner in 1994. It had suffered a stripped gear in the gearbox in about 1971, and it was considered too expensive by the owner to repair. The gearbox was in pieces, but fortunately all items were found. It also had the radiator from a pre-war tractor fitted (see 'A Matter of Coincidence' below), and luckily the farm scrap pile revealed the original castings as well as the original steering wheel. At the time of its acquisition, this tractor was the first post war tractor to appear on the Register, and it created quite a stir. Their true value and rarity is certainly now appreciated.
Initial work only involved getting a new gear manufactured (not cheap!), and rebuilding the radiator to refit the original castings which differ from earlier tractors. The tractor ran at first attempt, and apart from very minor issues since, has been a most reliable machine. it has been widely rallied all over eastern Australia, and carries NSW Historic Vehicle registration permitting its use in events on public roads and parades. Like all McDonald tractors, it is rather driver unfriendly, with only hand operated controls and very heavy steering on hard surfaces.

The exchanged radiator turned out to have some history attached, and I reproduce here a story related to the above tractor which I prepared quite some time ago, (names omitted to protect the innocent!) entitled ----
"A MATTER OF CO-INCIDENCE"
Several years ago, whilst at an otherwise uninteresting farm clearing sale, I was introduced to a farmer ‘A’ whose interest was John Deere Tractors.  When my interest in McDonald products was expressed, he revealed the where-abouts of a tractor. I travelled the 200 odd Km each way the very next day to look at this tractor, which was a T6C S/N 1029, one of only 11 of this model built post-war.  It was located on a farm near Parkes owned by another farmer ‘B’. It had, however, the radiator of an earlier model TWB fitted, which I learned had come from the tractor farmer ‘A’s’ father had owned and used many years before.  This tractor, minus radiator (and clutch), had since been disposed of.
Needless to say, I eventually acquired the TC6 and undertook its restoration, including reverting to the original radiator castings.  After its acquisition, I rang to thank farmer ‘A’ who mentioned that there was a clutch lying about which I could have if I called in one day, which I did a year or so later.
The T6C had originally been purchased by wheat farmers in the Trundle district, and I made contact with and visited their daughter ‘C’ who continues to operate the property.  When the opportunity arose early in 1997 to attend a rally and tractor pull at Trundle, supported by the Vintage Machinery Club of which I am a member, I was pleased to be able to take the tractor ‘home’, and not only was the daughter ‘C’ able to be present, but by coincidence, so too was farmer ‘B’ from whom I had acquired it.  He had brought along his Lanz Bulldog.  Also present on the day was farmer ‘A’ of John Deere fame.
Very early on the rally day, I went around those setting up exhibits, one being a display of Holt Caterpillar information by two brothers ‘D’ from Victoria.  They were seeking leads on these machines.  Our conversation naturally turned to McDonald tractors, and it turned out they had one, missing radiator and clutch, and they showed me a photo taken when they acquired it.  When they said it came from the Parkes district, the obvious possibility was confirmed - it was from farmer ‘A’.  I told them that I indeed had the missing items!  They revealed that they had purchased another tractor wreck in the hope of obtaining the parts they needed, but it had suffered from an attempt to break it up for scrap with gelignite, and most castings were cracked or broken.  I immediately recalled a tractor I knew this to have been done to in a scrap yard in Leeton, NSW (my home town).  I had tried to acquire another McDonald tractor in the same yard without success, but I knew both tractors to have since been sold.  Well, it will hardly surprise you that this turned out to be the very same tractor acquired by the brothers ‘D’.
There is more! With my T6C came original owners’ manuals for two earlier McDonald tractors, which the Trundle farmers had owned, each having been traded in on the next. The first, S/N 199 bought in 1934, traded in on S/N 696 in 1938, which was in turn eventually traded in on the T6C in 1953.  All of this was recorded in handwriting in one of the manuals, along with repair costs etc.
Subsequently, I had occasion to visit Victoria, having reached agreement with the brothers ‘D’ to exchange the original clutch and radiator castings from their tractor for some items from the wreck which would advance my own restoration of another tractor.  Whilst there, I related the story of the manuals, and mentioned that records show that S/N 199 was refurbished by McDonalds and resold as S/N 718.  One of them disappeared and returned with the flange casting from the tractor which had been blown up, and you will have guessed it already - it was stamped 718!
So whether you believe in coincidences or not, I most certainly do!

More recent notes on the tractor.
Our vintage machinery club has recently (late 2012) become the sponsor of some ploughing events. The McDonald T6C was entered in the first event in October, when it pulled a borrowed 2-furrow trailled plough with ease. A video of it in action can be viewed at: http://www.youtube.com/watch?v=Zt6VojckCdg (make sure the sound is turned up!).
It also participated in a short (22Km) trek in conjunction with the club's annual rally in September 2012. It proved to be a bit slow and a reminder how driver unfriendly such a tractor really is when negotiating traffic. Maximum engine speed was checked later at 530rpm when it should reach 600rpm. If corrected this would make it a bit quicker.

At the National Rally at Mudgee, NSW, April 2013 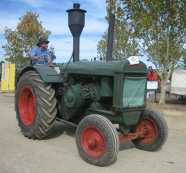 The tractor was transported to Mudgee for this major 3-day event, where there were over 1,300 registered exhibitors covering the whole range of historic machinery, from tea strainers to steam traction engines. Each day there was a parade of vehicles, mainly tractors, with expert commentary. I was unable to hear what was said about my tractor, as it is a trifle noisy.

This photo shows me participating in the parade.

I also took out and displayed the 40HP McDonald stationary engine 1113TL, which is the stationary version of the engine that powers this tractor.