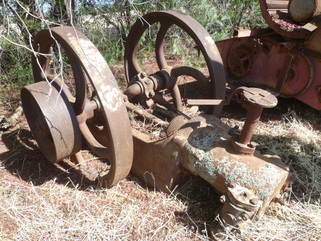 Engine as found
This engine was located on a property in the Riverina district of NSW in early February 2014. It was relatively complete except for the inlet valve chest (a rather important item!), lubricators, crank guard and side-shaft gear covers. It had lain in that position for many, many years.The original nameplate was present, showing what appears to be serial number 1270. This number however is inconsistent with all other known engines, the highest serial number being 262. So perhaps it is 127, which would be more in keeping with other similar engines. It has an inertia or pecker style governor.
The engine was collected in early March 2014, when a nice transport was also purchased and brought home. Also recovered were the original magneto and carburettor, and the muffler which has been confirmed as the original.

When the engine and transport (others may call this a trolley) were unloaded at home, it immediately became apparent that the two were a match - the bolt holes of the two exactly matched.

Meadowbank engines of this style are a very close copy of the Scottish made Melvin engines, and it is thought that due to World War 1 when supply was interrupted, Meadowbank went into manufacture for themselves. However, there are no known records of their production of engines, most archival information focusing on their tram and railway rolling stock manufacture, for which they are much better known.

The best information available suggests this is the 20th Meadowbank known in collectors hands.

The fact that two similar Meadowbank engines turned up on neighbouring properties, as well as another engine known to have been acquired not too far west, suggested an active agent may have sold these engines. This has been confirmed through a search in the National Library of Australia's Trove on-line resource, locating bi-weekly advertisements in the Narrandera Argus newspaper from 1915 through to 1924 featuring Meadowbank engines and other farm machinery.

For more information on the features of this quite unique engine and the story of its restoration, see additional pages. 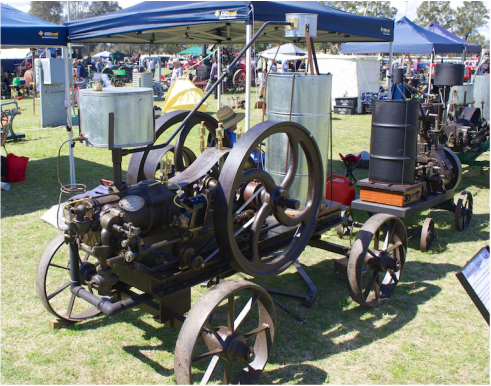 See it running at: http://youtu.be/uQaaJ9cF1Hs