This engine was purchased on eBay in early 2010, but transport and delivery was not finally organized until mid May. This was a running engine, and a video of it starting and running was posted on YouTube at the time of auction. See it at http://www.youtube.com/watch?v=0MCVyKLJGuM.

These engines were originally designed and manufactured in New Zealand, but manufacture of this improved model was undertaken in Australia. I have not thus far been able to date the manufacture of these engines, but it has to be assumed they were made in the 1950's. The original NZ version was substantially different, especially in the fuel injector pump area, and would be a very desirable engine to have. I have other examples of Model V and V1, which are not much different from the V2. It is apparent from the quite low serial numbers that probably fewer than 300 were made altogether. It appears these engines were also marketed under the names "Taylor" and "QBM" (this is an abbreviation of Queen's Bridge Motor & Engineering Co). I am certain QBM were just distributors, and an advertising poster I have shows the price to be Pounds113-10-0. I would welcome any further information that might shed more light on them.

Technically, the engine has some unusual features. Firstly it is 2-stroke full diesel. It breathes into the crankcase via a one-way valve which when running, makes nearly as much noise as the exhaust. The main bearings are very wide bronze tubular bearings which form effective seals, and are lubricated at about their centres by rings running in oil baths which are joined together by a small diameter pipe under the crankcase. An oil reservoir holding about 1 litre has a sight glass with regulator so the number of drips per minute of oil can be observed. This oil is fed via a pipe to a slinger or banjo attached to the crankshaft, which feeds the oil to the big end bearing. Surplus oil is slung from the bearing around the very confined crankcase and is carried to the top of the piston via the transfer port. It is obvious that plenty of oil reaches the top to service the rings etc. An additional pipe runs from the crankcase to the top of the oil reservoir to apply pressure to force the oil through the system. Some oil accumulates in the crankcase and a drain is provided to periodically remove it.

As most of my other engines are relatively large, I was challenged to set up a smaller engine that could be palletised for transport to the next National Rally to be held at Pinjarra, Western Australia, in early September 2011. This engine fits the bill. The first steps were to organise cooling and fuel tanks, and a transport to mount it. As soon as the dimensions of the tank were determined, the transport was designed and built, using new wheels cast from a wheel in my possession. Water and fuel fittings were obtained. In late October 2010, the engine was mounted for the first time and started. It ran for just a short time and seized up. This was tracked down to a dry main bearing due to a blockage in the pipe which joins the two main bearing galleries. Once rectified and oiled, the engine became free and now runs without any problem. It is not easy to start, though, and seems to require a shot of oil from the oil can into the cylinder first. Being a two-stroke, it is quite hard to crank after releasing the decompressor, since it has a compression stroke every revolution.
Postscript: A photocopy of the instruction booklet has come to light, and says in the instructions for starting, "Prime the cylinder with 2/3 of an eggcup full of lubricating oil." So there you are - I was on the right track! 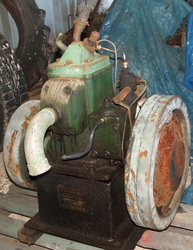 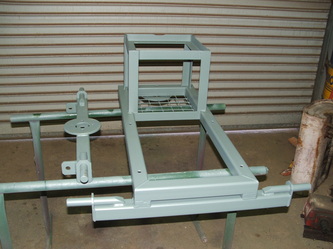 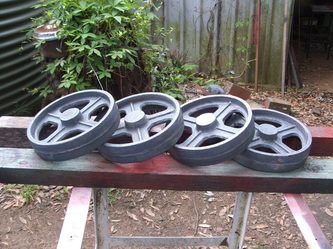 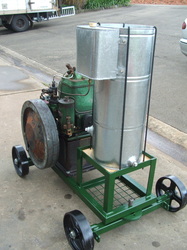 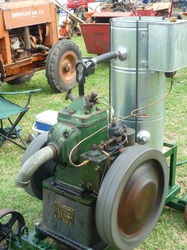 The photographs above show the engine as purchased, the transport welded up and under primer, the new wheels fresh from the casting foundry, and the 4th photo shows the complete engine with cooling tank, except for a couple of small details like a fuel cutoff cock. The engine will be first shown in early November at a display.

The first run in November 2010 revealed the transport was not rigid enough, allowing the cooling tank to shake considerably and causing the fuel line to crack. So the engine was removed, and the transport reinforced with steel bars on edge welded nearly the full length. Done at the same time was the relocation of the front axle 50mm back, so the overall length will fit on a standard pallet with wheels fitted. A new fuel line was made incorporating a loop for stress relief, and a fuel cock and water drain tap fitted.
Since then the engine has been run at several local events with no further vibration problem. It heats the water to near boiling after a few of hours running, so perhaps the water capacity is a bit low. It also leaks oil all around the crankcase gasket where it splits horizontally, and a lot of dirty black oil comes out of the exhaust. The 5th photo shows the engine running at the most recent outing on 2nd April 2011, and shows clearly the excess oil. The leak will have to stay that way, as I have no wish to fully dismantle the engine. The exhaust oil problem will be alleviated by extending the pipe a bit and placing a container below it for the exhaust to blow into. This should catch all the oil and quieten it a little, though it is not very noisy considering the short elbow that serves as the exhaust at the moment. The amount of lubricating oil being delivered could probably be reduced a little, which would reduce the amount at the exhaust.
Otherwise, it is very satisfactory and attracts considerable interest from the public who are intrigued by it being 2-stroke, and its total loss lubrication system.
For the trip to Western Australia, a purpose made container was constructed mounted on a 1 x 1.2m pallet. The cooling tank has to be removed and mounted sideways, but overall there is room enough for a few accessories such as toolbox, chairs, signs etc. Transporting of this together with a number of other exhibits from Club members went flawlessly, and the engine gave no problem. The only detraction was the amount of oil from the exhaust, and the container used did not have the desired effect. In the end a quantity of sawdust was used to soak it up satisfactorily. 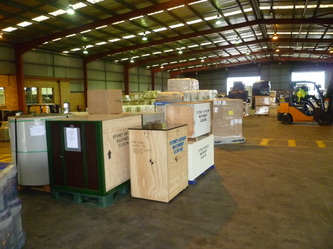 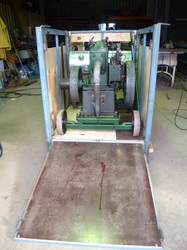 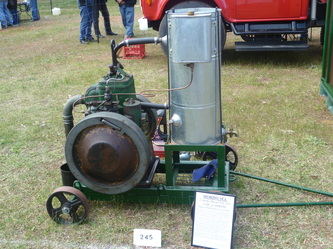