Armstrong Siddeley manufactured their air cooled stationary engines in the UK from about 1933 until 1955 in 1, 2 and 3 cylinder versions. They developed up to 11BHP per cylinder of 988cc. The air cooling is achieved by a fan cast into the centre of the very heavy flywheel, which is tightly housed within an aluminium shroud that ducts the air around the cylinder(s). These engines are not uncommon in Australia, but are rarely seen on the rally field.
They were very robust, the only issue being lack of maintenance, particularly the accumulation of debris in the cooling fins around the head and cylinder causing overheating and eventual failure. If left standing in the weather for any length of time, they will seize up due to the close fitting aluminium shroud oxidising and locking the flywheel.
This engine was acquired locally, mounted on a crude trailer, together with a centrifugal pump. It was quite complete except for the fuel tank. However, having a second identical engine with the tank solved this problem. I have elected to retain the trailer, but have reduced the axle width so it can be loaded onto my trailer, and fitted a towing hitch to enable it to be independently towed if required.
I started work on this engine early in 2010, at a time when a major mishap occurred to the McDonald N engine necessitating outside help which took 8 weeks. I was a bit disenchanted with the McDonald at the time, so turned my attention elsewhere for a while.
Dis-assembly was very difficult. A caterpillar that has as its host the so-called white cedar tree, leaves the tree to pupate in a long nose-to-tail procession, looking for a dark, secluded place to spend the winter. In this case, they found the cooling system of the engine an ideal location, and even entered the air cleaner and into the upper cylinder through the open inlet valve. A photo below will show the extent of their invasion and the pupal castings left behind. To remove the flywheel, it was noted the end of the crankshaft had a 1"UNF internal thread, so a suitable high tensile bolt was cut down, drilled and tapped 5/8"UNF, and a 5/8"UNF jacking screw made up to screw down its centre. Strong pressure was applied with this setup, then heavy blows with a soft hammer made all around the shroud, then the jacking screw tightened a bit more, and so on... Eventually it yielded, though later the shroud was found to have been distorted a little (another use for a hammer!!). After winning on this one, the cylinder was removed - it is a blind head type engine, even though the service manual I possess shows a removable head - very strange! The governor housing also proved a challenge to remove, the problem proving to be an oil seal that had corroded away to nothing allowing water in to the bushing behind it. The oil seal behind the flywheel was also unserviceable.
Work needed included regrinding the valves and valve seats, of course cleaning out all traces of those caterpillars, working over the injector and injector pump which was seized, and fitting new oil seals. The one on the governor housing was standard off the shelf, but not so the flywheel seal. In the end, I adapted a 130 x 110mm seal with sleeves turned up for both the inside and outside diameters.
The engine remains in limbo now until the McDonald N is complete, but requires very little work to finish it off. 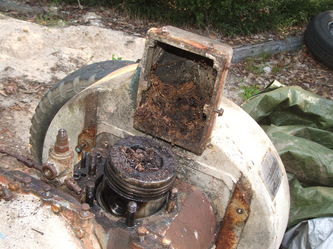 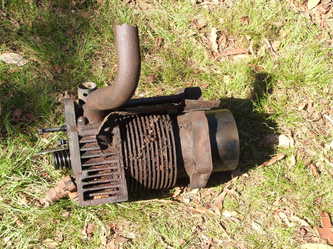 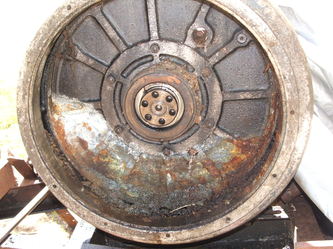 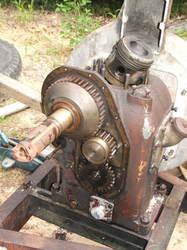 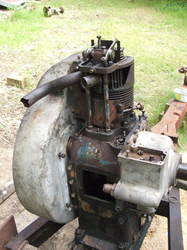