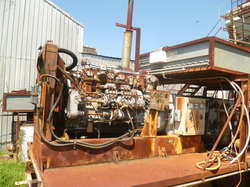 Here is the engine as found late October 2015. The engine was located in the outer Sydney region where the property was to become part of the second airport development. It had a 100KVA alternator direct coupled which in turn powered a chiller plant.
It was mounted on a trailer, but had clearly not been moved for many years. Retrieval proved very difficult partly due to untimely rain making access almost impossible. The whole assembly weighed 5 tonnes or so, and was quite a lift for a truck mounted Hiab crane.
The setup is said to have been originally used by a travelling circus troupe, providing the chilling required for a portable ice-skating rink. I hope to confirm this.
When finally separated, the engine, its base containing the fuel tank, and alternator, weighed 2136Kg.​
​Below is a photo of it arriving at its destination - quite a beast! 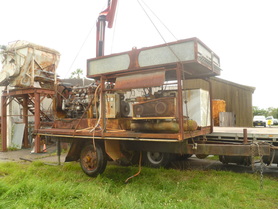 Removal and disposal of all that extra stuff posed a big challenge and took many weeks of hard work. Finally the engine was lifted free so it could be worked on.
The previous owner assured me it was no more than 4 years since it had been used, but evidence accumulated that it must have been much longer. The main issue was it spent its entire life in the open exposed to all weathers.
The alternator was removed also, as it was not operational and simply added a lot more weight to the unit.
​When the oil was drained, at least 4 litres of water came out, and the oil itself was thick and gooey. Initially, I washed out the oil filter and put a new lot of oil in the engine.
The first thing to check was the injector pump and it was stuck with the rack in the fully open or start position. Some of the priming levers could be operated albeit with some force (this later proved to have been a mistake). The drive to the injector pump was uncoupled to avoid turning it when turning the engine, but the engine, too, was seized. I manufactured a large socket to suit the nut on the front end of the crankshaft, and with a very big bar, was able to turn the engine nearly one full turn. After working it backwards and forwards a number of times, enough flywheel momentum was available to get it over this binding spot. There was absolutely no sign of compression during this operation.  After a suggestion from a colleague, I added some diesel down the injector holes and turned it using batteries and the starter. It made a terrible noise at first, but after adding more oil, it came completely free to the point when it could be easily turned by hand with the fan. It obviously benefitted from circulation of lubricating oil too. Afterwards, by placing an injector in each cylinder in turn, reasonable compression had built up in most cylinders.
The injector pump however was firmly stuck with all the plungers now in the up position. The injector pump bodies were removed, and after much checking of internet sources, and in particular with the assistance of a colleague, the secret to its disassembly was discovered, even getting the badly stuck No 4 pump free. Heat was the secret, with the household oven being used to heat the whole assembly to about 150C which I am sure helped get it apart. After lapping in the pump plungers and ensuring they were free, the pumps were reassembled without disturbing their original calibration settings.
​
Below is a photo of the engine running for the first time on 18 Jan 2016. 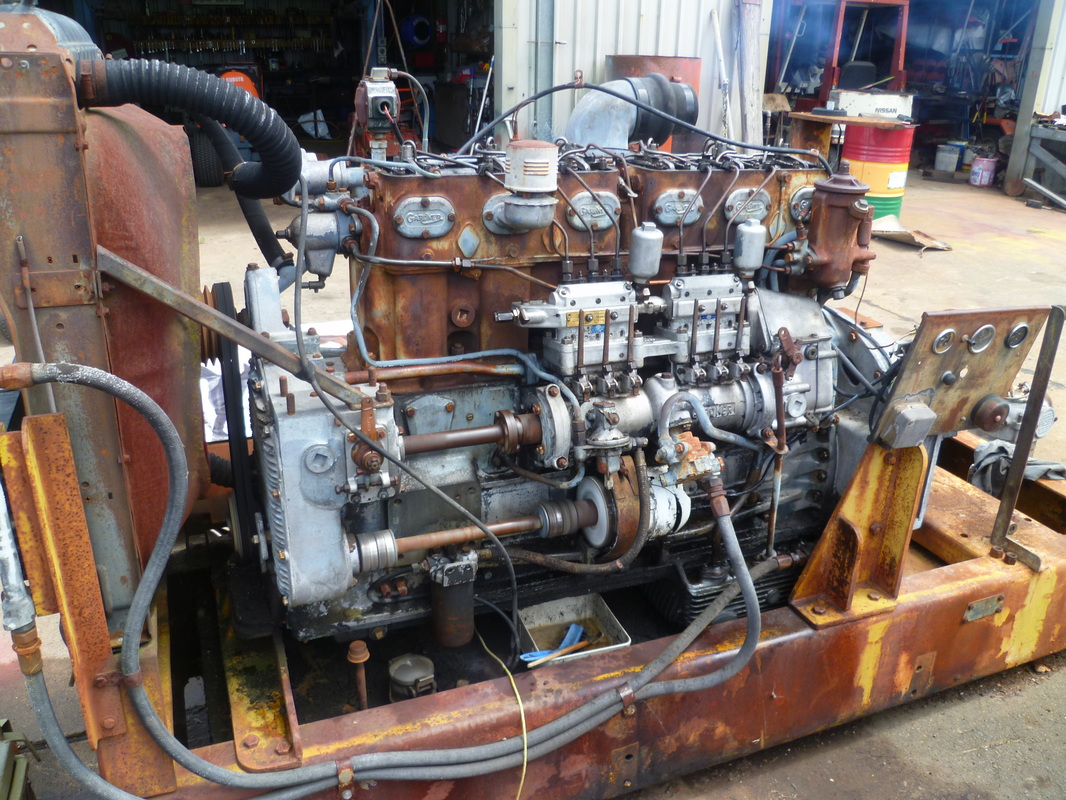 The injector pump and all the fuel ancillaries were reassembled, fuel primed and bled, water added to the radiator, batteries connected, and a start attempted. As soon as I released the first decompressor (I did not want to have an hydraulic lock due to the oil that had been added to the cylinders), it burst into life, spewing heaps of rubbish out of the exhaust, but settled down to an even beat pretty quickly. It ran well for nearly an hour. The rocker covers and original air cleaner have since been refitted, and a general wash down and tidy up carried out. In the last few days it has been started several times and run for periods of 45 minutes or so. A short video taken during its first run can be seen on https://youtu.be/gcFKdojWZTw.
A replacement ammeter has been fitted, prooving that the alternator works well, and now all gauges are working. The  pipe coupling on the thermostat housing was rusted through so it has been replaced and all new radiator hoses fitted. A disaster struck late in the piece when the radiator unexpectedly started to leak. It had to be removed and the lower supporting structure unsweated and cut off, revealing that rust had grown and cause a split to occur in the brass bottom tank. This was soldered up, a new framework fabricated, and the assembly remounted. The problem had been resolved.
​As this engine is intended only for display, a suitable trailer was located which required some modification from its previous dedicated application to enable the engine to be mounted satisfactorily. This was accomplished and the whole trailer stripped, repainted and rewired with all new multi-voltage LED lights. The engine was finally mated to the trailer on 13 April 2016, and taken to a display over the three days 15-17 April where it debuted amongst a lot of other single cylinder stationary engines popping away. The Gardner ran as smoothly as silk, and stood as a testament to British engineering excellence.
Below is the engine pictured at the Hawkesbury Show club display. 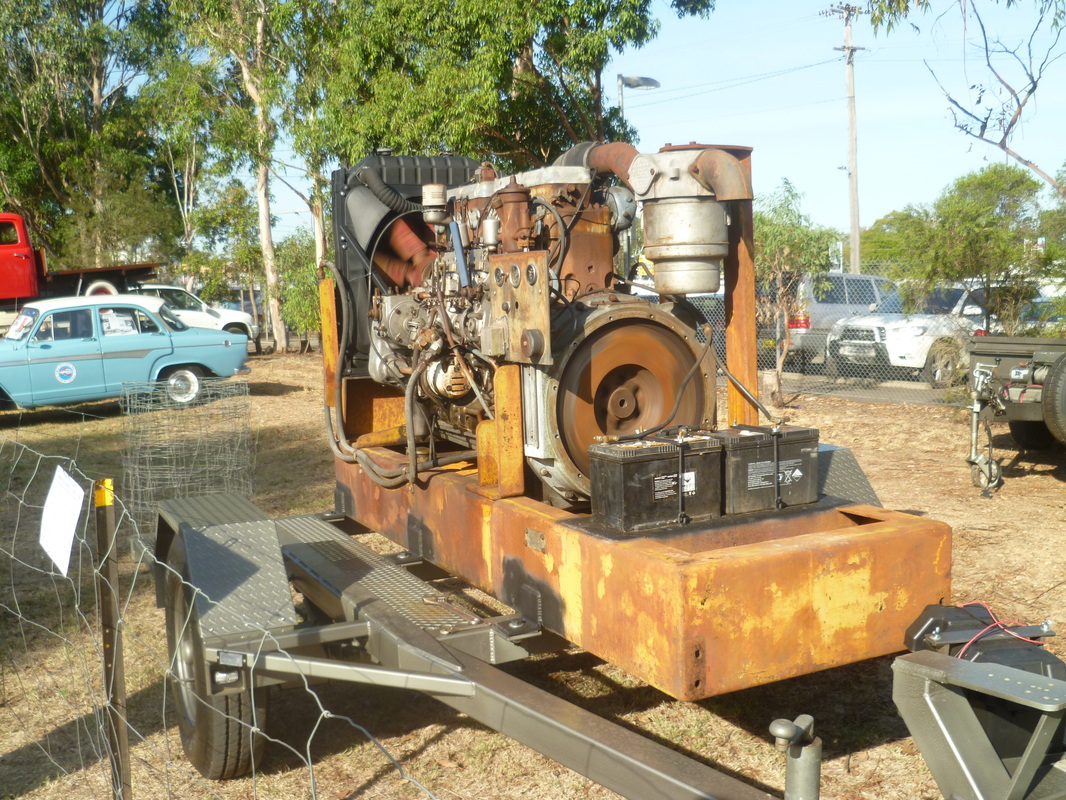