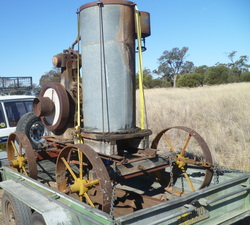 R&T CF diesel as purchased
This engine was purchased on eBay in May 2013. It is actually badged as Horwood - Bagshaw, who sold sufficient engines to warrant having them identified as their own.  It was located on a property near Forbes, NSW, where it had spent its working life driving a firewood sawbench.
The engine was free and had plenty of compression. The timber under the water tank is rotting, and the strap shown holding it down was in case the stays holding it to the timber did not survive the trip home.
The transport upon which it is mounted is not original and has been adapted from another application.
The engine was checked for lubrication, the throttle rack freed up, some fuel added, fuel system bled, and it started at first attempt. It does need a muffler, though!
The tank was later filled with water and numerous leaks were apparent, the worst being the top hose which was replaced and new clamp fitted. The tank leaks at its base which may explain why several layers of tractor tube rubber are underneath it.
The engine was shown at a 2-day event on 18 & 19 May when it ran faultlessly over much of the two days. It was slowed down a little from its normal governed speed to reduce vibration, as the transport is far from solid. It leaked quite a bit of water, mainly from the base of the tank, most of which was caught in buckets and tipped back in. Despite these shortcomings, it appealed to the public as a "straight from the farm" example, and will be shown again when the opportunity presents.