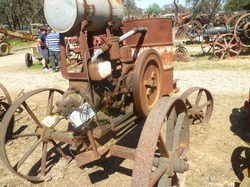 As presented at the auction
This engine was amongst the extensive offerings at an auction in late October 2016.
It is the smallest of McDonald's range of semi-diesel 2-stroke engines, one of three types based on the design of the engine in the Avance tractor from Sweden that they sold during the late 1920's. It has a bore of 6" and stroke of 8" giving 8-10bhp @ 500 rpm.
This particular engine was made in 1931 and is an early example, having what is known at the 'austerity' head, and the McDonald-made lubricator prior to them adopting the Manzel from the USA. The head differs from later ones in having two water galleries to the front section cast in, whereas the design was later changed to having 2 separate bronze tubes serving this function. The design was deficient in being very difficult to maintain the water seal.
The 'P' type engine was used extensively to power McDonald's medium weight road rollers, as well as for general purpose stationary applications. I have seen one powering the docking saw in a sawmill powered by T and ML engines. This engine is fitted to an original McDonald-made transporter, making it a so-called 'portable' engine. These transporters are extremely rare, and alone was worth the purchase price.
(June 2019 - minor corrections of factual errors)
Restoration
I set about evaluating the engine as soon as it arrived home. It was apparently very firmly siezed, but was totally complete and unmolested. Removal of the crankcase cover showed the big-end bearing at the bottom of the crankcase and it had had water to a level half way up the main bearings - not a good start! Removal of the head and exhaust elbow showed no sign of water in the piston area, so the big-end bearing was removed. After removal of all the fuel and lubrication system, an attempt was made to turn the crankshaft with success, so then the piston was removed, and the crankshaft turned some more. After a lot of oil and some initial effort, it began to turn freely, with no sign of complaint from the roller main bearings as I had feared.
The transporter ia too long for my trailer. After careful consideration (and not wanting to butcher the original), I have moved the front axle back 10" by drilling a new set of holes in the chassis rails. I have also taken off the wheels, finding some spacer rings missing, and these have been made. One of the wheels was on back-to-front, and this has been rectified and the axles greased.
All of the accessories - reed valves, governor, injector pump, lubricator reservoir and pumps - all turned out to be quite serviceable, responding to a bit of cleaning and adjustment. Even the fuel tank is intact and contained some old fuel and only the slightest bit of water. The only questionable item is the big-end journal, which was a bit corroded from long-term immersion. The bearing shells have plenty of white metal and ample scope for adjustment by removal of shims. As at late November, the crankcase has been cleaned out, all the new gaskets have been made, rings freed on the piston, hold down stays made for the water tank, and a replacement tank is under consideration. The only downside is main bearing noise has appeared, not surprisingly.
For various reasons work was set aside in favour of a couple of other projects, so in early 2019 attention returned to this engine. I finally solved the problem of poor spray pattern from the atomiser, and it sprang into life after some trying. After its first run it became very easy to start, so it was been displayed at the 2019 Hawkesbury Show where it ran very well, except for now significant main bearing rumble.It is fairly smokey, probably due to excess oil supply, but I would rather that than the opposite, especially as the older-style oil delivery system is not easily regulated.

Below is a photo of it running at the recent show. 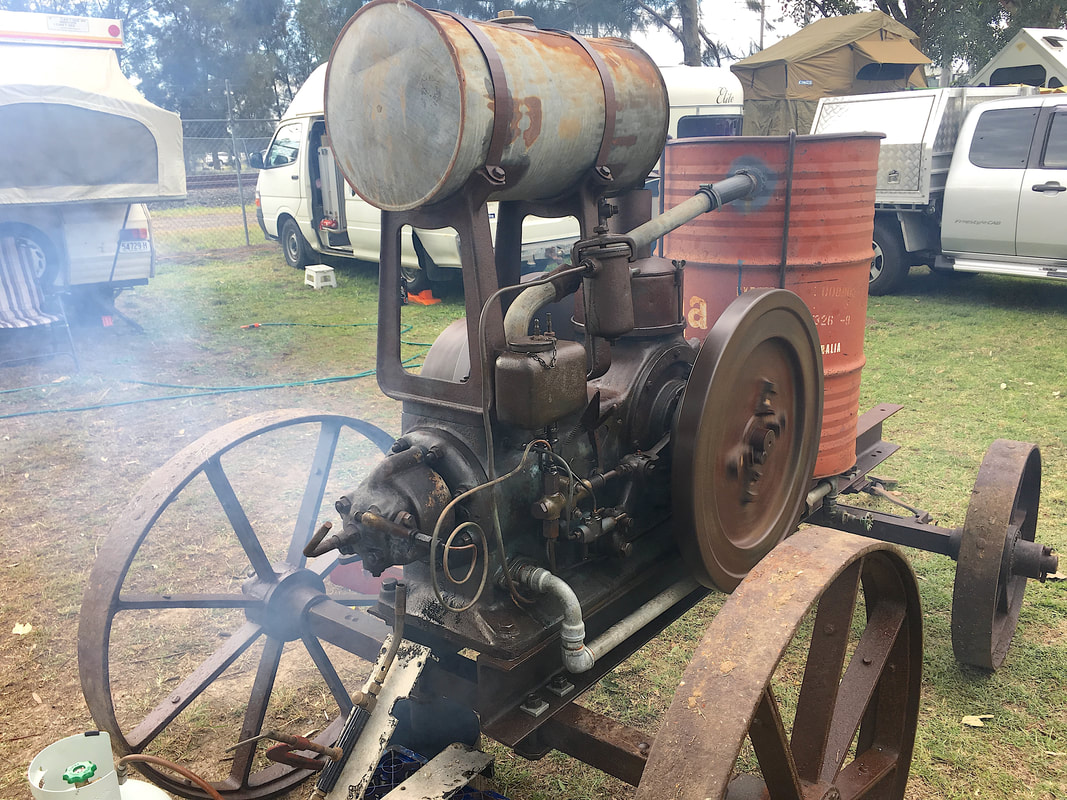