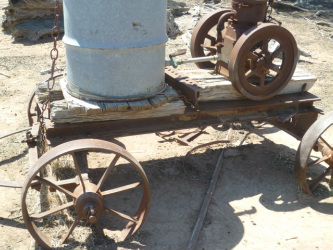 Transport as found showing small engine mounted
The transport was found on the same property as the engine, but was at a dam where the small engine mounted on it had been used to pump water to stock.
It was considered at the time to be a nice transport, and when the engine was collected, I was also able to acquire the transport less the small engine. It came as some surprise to find it had originally mounted the Meadowbank engine, as it has four bolts or holes on exactly the right centres for the engine base.
It differs significantly from Australian made transports normally mounting these and Melvin engines - the wheels, general construction, and width. In this case the bolts are wholly within the channel rails, so the engine is mounted on a steel plate attached to the rails with countersunk bolts. This plate is only 1/4" thick, and there is quite an impression where the engine base rested. Below are some photos of the transport . 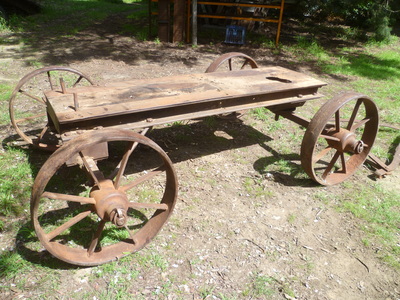 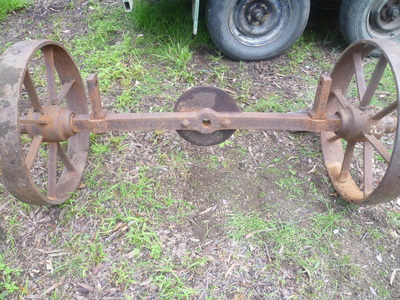 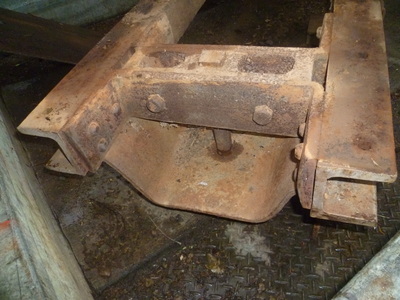 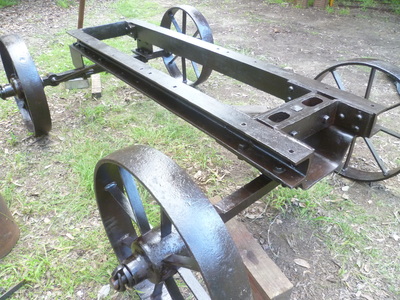 The origin of the transport is unknown, except that during the cleanup, the letters "FRO" were found on one steel channel. This suggests the steel came from Frodinghams, a steel producer at Scunthorpe in Lincolnshire, UK. Another nearly identical transporter is in the possession of an acquaintance, but again its history is unknown. The location of the steel source in northern England could suggest supply to the Melvin factory in Scotland, but this is pure conjecture.