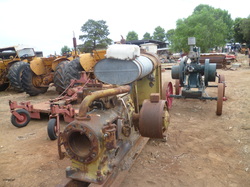 This engine was purchased at auction in Central Western NSW in February 2013. As can be seen, it had been dismantled quite a long time before, and many parts such as the head, flywheel, piston and conrod, air cleaner etc, were on a separate pallett.
Misssing were the bigend bearing shells and cap, two piston rings, and the bonnet that covers the entire assembly. There was surface rust only on most parts.
The radiator appeared in good condition (it is the same as the tractors except for the top tank), the fuel tank was intact. The base had at sometime had the ends crudely cut off with oxy-acetylene, but otherwise all the small items like fuel system were present.
Soon after acquisition, the opportunity arose to purchase another derilict engine, which, although badly siezed, did have the vital bigend bearing and eventually yielded the missing piston rings. As a bonus, it came with an original muffler and a complete and fully functional clutch, which would replace the other found to have been bolted tight.
The decision was taken not to paint the engine, as it still had some of the original army colour.
The first step was to identify why the engine had been dismantled. One crankshaft counterweight had been removed and an attempt made to remove the other, and signs of crude efforts to get off the clutch side main bearing covers. In the bottom of the crankcase was found at least 500gm of white metal that had melted there, and this gave the clue to the problem. It was found the small tube that delivers oil to the slinger mounted on the clutch side to feed the bigend bearing had broken off, so oil would merely have trickled down the inside wall of the crankcase and starved the bearing. It was a simple matter to remove the clutch and bearing cover, then the bearing itself, and take off the slinger (sometimes called a banjo), straighten it up, get the counterweight in its correct position again and reassemble everything correctly. Luckily, the crankshaft journal showed no sign of trauma and cleaned up very well, having just light surface rust. The atomizer resisted all efforts at getting it out of the head, and eventually the heat of a blacksmith's forge did the trick, without damage to the precious atomizer. The radiator proved to be totally blocked, so the bottom tank was removed and each and every one of the 400+ tubes cleared, then it was reassembled.
After much effort, the donor engine eventually yielded and the piston removed, and rings freed and removed. However, the bigend bearing proved unusable, the thrust side had run and even blocked the hole for delivery of oil to the gudgeon. So this was entrusted to an expert to be re-metalled. The journal diameter is 3.248" (approx 82.5mm) so it is quite large.
These  engines of wartime manufacture used a McDonald made force feed lubricator, which, unlike the American Manzel type used previously, had been cost reduced and had just a single plunger, which failed to meter the oil flow reliably, especially when the oil viscosity was affected by heat. The result was a high failure rate, and the donor engine may have been so affected. McDonalds were forced eventually to redesign the lubricators and ended up making a close copy of the Manzel, the main difference being a cast box instead of the Manzel's sheet metal one.
The engine was reassembled by October 2013, and it ran well, except for severe shaking of the radiator. An inspection of the bigend bearing afterwards indicated oil starvation however.
​No further action took place partly because it was realised it could not be lifted with the means available, and partly because other priorities intervened. Here are a few photos. 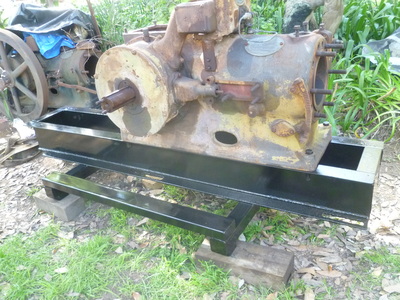 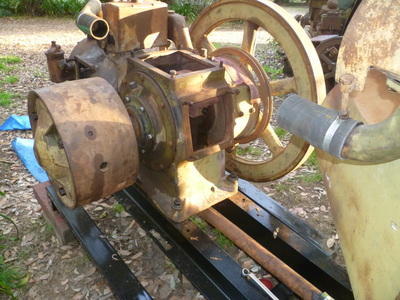 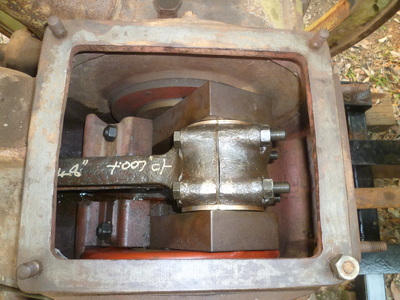 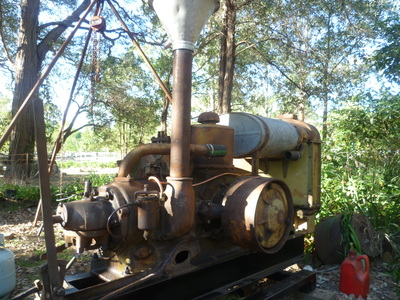 Fast forward to late 2018. The engine was successfully loaded using a tripod and chain block and transported to a workshop, where rollers were fitted for mobility, enabling it to be winched on and off the trailer. A strut was also added to stabilise the radiator. The lubrication was checked over carefully and primed to the bigend bearing as well as to the cylinder, and a start attempted. It ran well, and a subsequent check of the crankcase reassuringly showed oil flung from the bigend.
The engine was then displayed at a club event when it ran well and proved very easy to start, sometimes hunting a little on the governor, sometimes running very smoothly - no idea why.  However, at this time no cooling fan was fitted, so a fan bracket that had been fabricated for it several years prior, and a fan hub and blade were fitted with a new belt. The engine is now complete except for a bonnet, though how this is mounted is not known, and there are no other examples about to copy from.
Except that it is rather too heavy for the rollers on grass or soft ground, it is an excellent show piece.
​Here are a couple of recent photos. 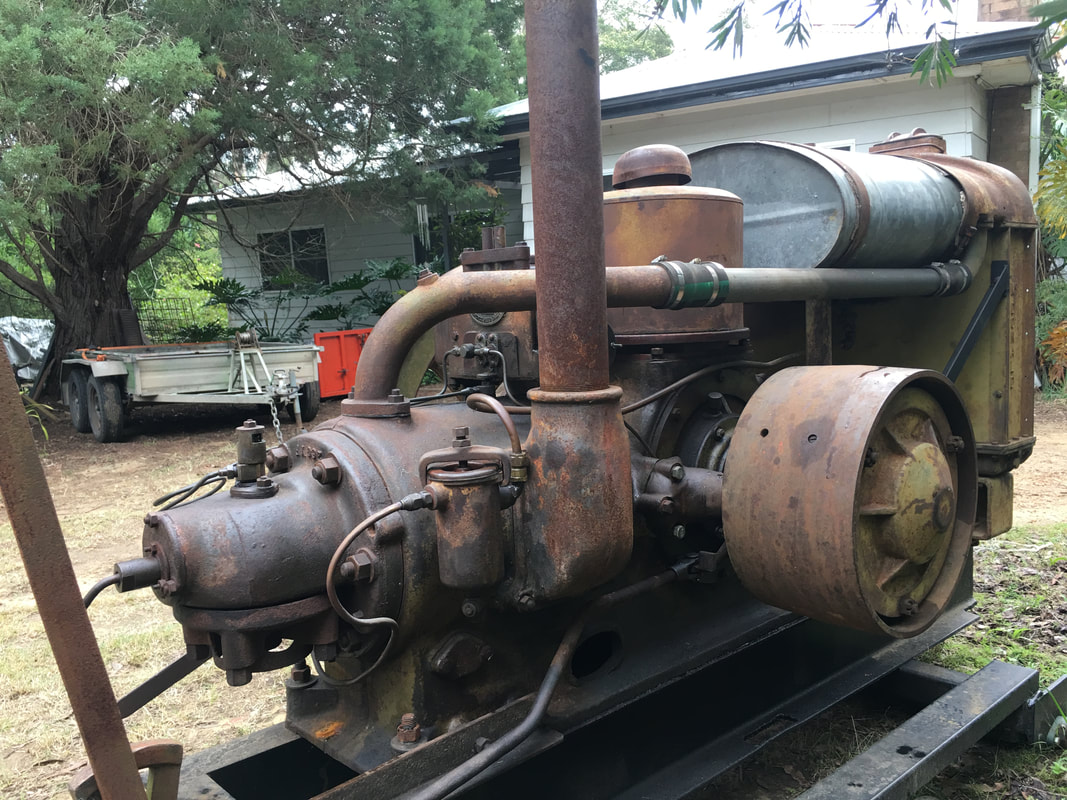 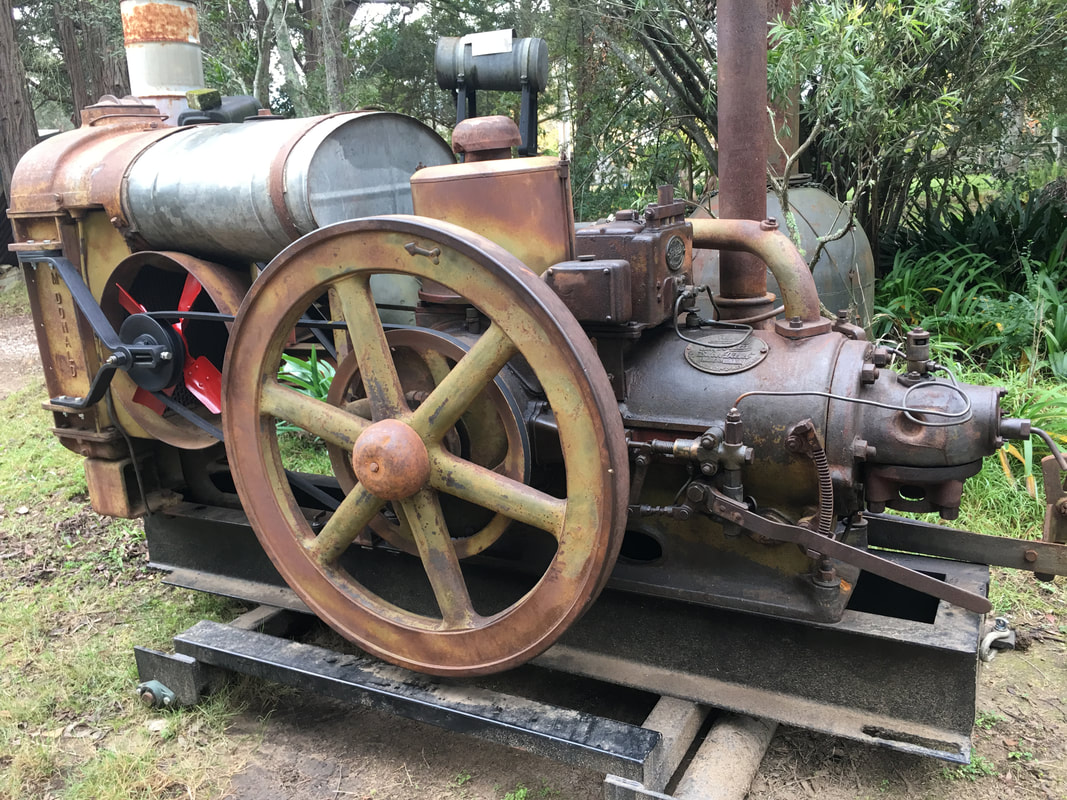