_Bruce & McLure engines were manufactured prior to 1920 at both Warrnambool and Geelong in Victoria. They were made in about 3HP (this engine) and about 5HP sizes, although the horsepower rating is not marked on the engines themselves. They were designed to be started on petrol and changed over to kerosene fuel once hot, as were many engines of the period. Later the company became known as Owen, and engines continued to be made under the new name in Geelong for a time.
My engine was located on a property at West Dapto, NSW, where my father agisted his trotting horses in the early 1980's. Being aware of my interest, he took me up to have a look, and what I found was a fallen-down shed with the engine's exhaust poking through, and various dairy related appliances - grister, cream separator and feed chopper - all able to be driven from one or other of the two belt pulleys fitted. My father negotiated a price of $25.00 with the property owner, and the engine soon was mine. I obtained the original crank handle, water tank and fuel tank straps with it. The only missing item was a small brass cover on one of the main bearing oilers, which I was easily able to make. I was quite excited when I learned what a rare engine I had.
It was seized, but upon dismantling, it was quite easy to free and there was minimal rust damage in the bore. Everything else was quite sound, and a friend gave me a more appropriate magneto than the Lucas RS1 fitted. I made a mounting trolley from angle iron but it proved to be insufficiently rigid and allowed the water tank to shake somewhat. A new trolley was made from stiffer material and this has proved satisfactory. When transferring the engine from the original trolley to the new one, a mishap occurred resulting in a damaged Schebler carburetor. Another incomplete carbie was obtained and its body used to make a replacement. The water tank is made from ordinary corrugated iron rolled to just 15" (27.6cm) diameter, which I am told would be an impossibility today!
The engine takes a good turn of speed to get it started, but runs reliably all day. It has been coupled to a 2" (50mm) centrifugal pump as a working display. It has been at the back of the shed for many years, hence few photos exist. The first photo was taken at Young in 2006, the others  were taken when displayed in July 2011, when it was not unloaded from the trailer, though given a run. 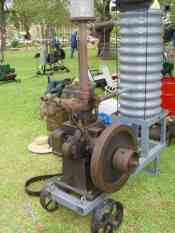 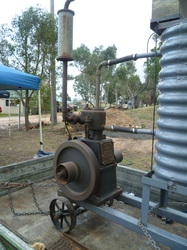 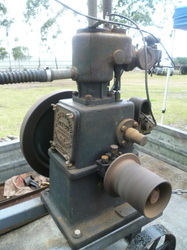 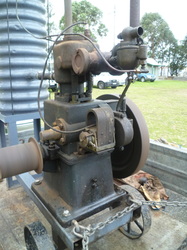 In late 2012 during a trip along the Victorian Great Ocean Road, when visiting the Cheese World Museum near Warrnambool, I chanced upon an adjacent separately housed engine collection which impressed me tremendously (even if it failed to impress my travelling companions!). It is known as the Lee Family Engine Collection, and comprises over 100 stationary engines, all manufactured in that part of Victoria, and nearly all in working order. The overwhelming majority were Bruce & McClure, in many different models and variations. I had no idea they made so many different engines, even a twin cylinder model. This museum is well worth visiting.